A Brighton councillor who started as a barrow boy has been honoured by the Queen in her 90th birthday honours list.

Steve Bell who was elected to Brighton and Hove City Council last year – he represents Woodingdean – is known for his plain-speaking style. He can now style himself Steve Bell CBE.

Councillor Bell, 60, has risen up the ranks of the Conservative Party, holding national office. And during the rough and tumble of the European Union referendum campaign, he has worked behind the scenes trying to keep the two sides able to come together again after the vote. He is a leading figure in the local Leave campaign. 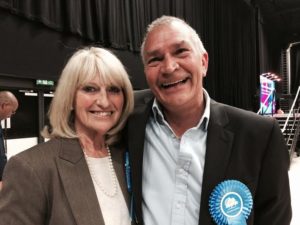 He joins the likes of Sir Rod Stewart on the latest honours list – the rocker said of his knighthood that he’d “wear it well” – and Dame Vera Lynn, from Ditchling, who becomes a Companion of Honour.

Others honoured from Brighton and Hove include Krazy Kat Theatre founder Kinny Gardner, 56, who has been awarded the British Empire Medal.

And social worker Nigel Nash, 62, who becomes an MBE for his voluntary work in the church and LGBT community as well as his work with vulnerable children.

Mr Wilson, now the chief executive of the Surrey and Sussex Healthcare NHS Trust, was in Brighton earlier this week talking about the latest policy changes.

He is leading local health services in bringing in the Sustainability and Transformation Plan for Sussex and East Surrey.

Two Brighton University academics were also recognised for their work – Nick Webborn, who becomes an OBE for his role as chief medical officer to Paralympics GB, and Ann Moore, who ran the university’s Centre for Health Research and who becomes a CBE for services to physiotherapy.

Civil servant Kathleen Reid, from Brighton, has been made an OBE for her work as deputy head of the South Sudan office at the Department for International Development.