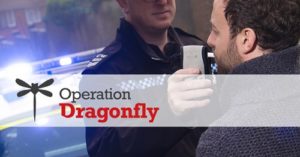 From Monday 6 June, officers have been carrying out dedicated patrols to target offenders as part of Operation Dragonfly, and have made a total of 45 arrests, with 29 charged to date across the county.

Chief Inspector Phil Nicholas, of the Surrey and Sussex Police Roads Policing Unit, said: “Unfortunately, no matter what time of year it is, drink and drug-driving is a recurring problem. These statistics highlight the fact that whatever the weather, a lot of people still continue to take risks on the roads in Sussex.

“People associate summer with longer hours and social events such as parties and barbecues, but there’s no specific explanation as to why we have so many offenders at this time of year. The message is and always has been clear – drink or drive; never both.

“We have a zero tolerance approach towards drink and drug-driving, and anyone caught driving while above the legal limit of drink or drugs will be dealt with swiftly and robustly.”

The Brighton and Hove related charges are:

Stephen Watson, 48, unemployed, of Brighton Road, Lancing, was arrested in Richmond Parade, Brighton, on 7 June and charged with driving with 121mg of alcohol per 100ml of breath in his system. He is due to appear before Brighton Magistrates’ Court on 23 June.

Zsolt Plugaru, 21, a car valeter, of Richards Road, Portslade, was arrested on the A259 at Hove on 8 June, and charged with driving with 43mg of alcohol per 100ml of breath in his system and driving with no insurance. He is due to appear before Brighton Magistrates’ Court on 23 June.

Joonas Kuokka, 26, a garden centre employee, of Coleman Street, Brighton, was arrested in Ditchling Bostall, Hassocks, on 9 June and charged with driving with 46mg of alcohol per 100ml of breath in his system. He is due to appear before Hastings Magistrates’ Court on 29 June.

Wesley Twyman, 38, a sales representative, of Swanborough Drive, Brighton, was arrested in Sutherland Road, Brighton, on 11 June and charged with driving with 64mg of alcohol per 100ml of breath in his system. He is due to appear before Brighton Magistrates’ Court on 27 June.

People in Sussex can text officers on 65999 with the details of people they suspect of drink or drug driving or visit http://www.operationcrackdown.co.uk.

You can also contact the independent charity Crimestoppers anonymously on 0800 555 111 (http://www.crimestoppers-uk.org).