Car flips over on Hove seafront 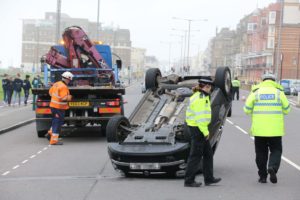 A woman was treated for a head injury after her car flipped over on the Kingsway during rush hour on Monday evening.

The black Fiat 500 crashed into a parked car and overturned shortly after 6pm yesterday. The driver was arrested on suspicion of drink driving, but then taken to hospital.

A police spokeswoman said: “Emergency services were called to the Kingsway in Hove at 6pm on Monday, June 20, near to the junction with First Avenue.

“A black Fiat 500 had collided with a parked car, a brown Toyota Auris, and overturned. A 28-year-old woman from Littlehampton was treated for neck pain. There was no one in the parked car.

“The woman was initially arrested on suspicion of drink driving but taken to hospital to be checked over. She will be spoken to by the officer in due course.”

An ambulance spokesman said: “SECAmb was called shortly after 6pm to reports a car had overturned on Kingsway close to the junction with First Avenue. A woman aged approximately in her 20s was assessed and treated at the scene for injuries including a head injury before being taken to Royal Sussex County Hospital.”

A spokeswoman for East Sussex Fire and Rescue said: “Emergency services At 6.04pm on 20 June, Hove firefigthers were sent to First Avenue, in Hove, following reports of a road traffic collision. Firefighters made the area safe and used an environmental pack at the scene.”