Brighton and Hove Stands Together in the rain

Councillors and activists urged Brighton to love not hate on a rainy Tuesday evening at the Level days after Britain voted to leave the European Union. 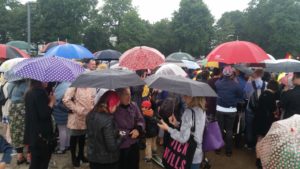 Brighton joined many other cities across the country Standing Together alongside the people of Europe and peacefully but proactively reflecting about the future on Tuesday 28 June.

Stand Together organisers said the rally was about moving on from the In/Out campaign which divided Britain and trying to rebuild unity and find positive ways forward regardless of whether people voted in or out.

But feelings did run high. Green councillor Tom Druitt said he was concerned that the vulnerable will be hardest hit by Brexit.

He said: “I was angry.  Angry that so many people had been duped by a pack of lies.  Angry that the right-wing media had perpetuated the myths so wilfully and effectively.

“Angry that people had been taken in  and targeted their understandable disillusionment and frustration with the establishment, not at the people who are actually responsible, but at the most vulnerable in our society.”

Mr Druitt’s initial solution was to give a stranger a hug and then campaign peacefully for the loving, welcoming, open community of Brighton and Hove and beyond.

Councillor Inkpin-Leissner, a German EU citizen, urged all residents to channel their anger and love one another. He said: “It was mentioned that we have to fight the right wing movement. Yes we do. But let me make this very clear.

“When we had right wing marches in Brighton I witnessed violence. Not only from the right wing but as well from the so-called antifascist movement. I cannot and will not stand for that.

“This violence is wrong, may it come from the left or from the right wing. I cannot support this. Violence is always wrong.

“When they come to Brighton, meet them firm, show them that they are wrong and not welcome in our open and free city. But never use violence. Love is always stronger!”

Dr Lucy Robinson, a senior lecturer in history at the University of Sussex and minister of nagging for the Facebook group People’s Republic of Brighton and Hove asked:

“How do we make our little community safe for everyone but more importantly our global community? I’m not going to tell anybody how they should feel, whether they should respond with Love or with Anger, or a mixture of both.

“There’s a place for solidarity and love but righteous anger needs to be acknowledged too.

“I’m not going to tell you what your tactics should be. Each other’s tactics are not the problem.

“But I do believe that we can do more than shout ‘not in my name’. We can organize on whatever levels, in our everyday lives, on the streets AND in mainstream politics.

“We can refuse the divisions that have been imposed upon us. We can insist that we all get the world and community we deserve.

Ben Walters from Brighton Anti-Fascists said: “In the killing of Jo Cox and in the rising tide of hate following the referendum, we have seen what fascist violence looks like. We need to organise our communities to drive fascists off the streets. They must not be allowed any chance to spread their ideas and gain strength.”

Chair of South Downs Liberal Youth Drew Miller-Hyndman said: “We attended the rally today, not only to affirm our support for the UK remaining in the EU but in solidarity with EU migrants who have faced unprecedented hatred in recent days.

“It was a great turnout despite the rain and we would like to thank all those involved.”

However, he encouraged Brighton to stand firm: “Acts of kindness that bind us together as a community have never been more needed. Those at the sharp end of the fear and scaremongering need our support… It is no longer acceptable to remain quiet or walk to the other side of the road if we hear or see prejudice, xenophobia or racism – all of us must challenge them directly.

We also have to say it loudly and clearly: immigrants you are welcome here.”

There is an anti-racism demonstration this Sunday 3 July. Supporters are asked to gather at the Level at 12.30pm.