Brighton Kemptown MP Simon Kirby has pledged his support for Theresa May after she announced her intention to run for the Conservative Party leadership this morning (Thursday 30 June).

Former London mayor Boris Johnson has ruled himself out of the race to replace David Cameron as party leader and Prime Minister.

His colleague Michael Gove, a fellow leading light in the campaign to vote Leave in the European Union referendum, has declared his candidacy.

Mr Kirby said that he was a strong supporter of the Home Secretary and Maidenhead MP in her leadership bid following Cameron’s resignation in the wake of the EU referendum result.

He said: “I believe that Theresa May is the strongest candidate to become Prime Minister in these difficult times.

“She is a highly competent politician and has visited me in Brighton Kemptown in the past and seen what a special place our constituency is. 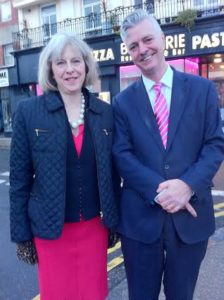 Simon Kirby and Theresa May in St James’s Street, Brighton

“We need someone with her experience to unite and lead us.

“Please be assured that I will continue to do my very best to be a loud voice for local people in Brighton Kemptown and Peacehaven.” 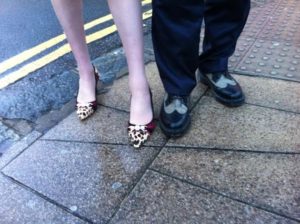