Four people have been injured after a balcony they were standing on collapsed in Brighton last night, sending them plunging into the basement below, with two still in hospital this morning. 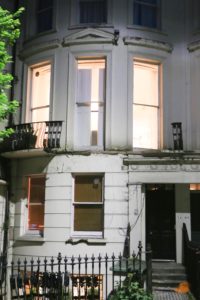 The injuries were described as serious but not life-threatening. A firefighter said that one of the four had suffered internal injuries, including a broken pelvic bone, another had a broken arm, one had “head trauma” and the fourth had “open wounds”.

Brighton and Hove City Council building control officers are now investigating the cause of the collapse, which happened shortly before midnight.

Emergency services rushed to the scene after a call was received at 11.49pm to the house in Montpelier Road.

A spokesman for East Sussex Fire and Rescue Service said: “ESFRS received a call at 11.49pm to a balcony collapse in Montpelier Road, Brighton.

“Both technical rescue units from Battle and Lewes were in attendance as well as a number of fire engines, the aerial ladder platform appliance and support units.

“Four people have been injured and taken to hospital. The incident is currently ongoing and a technical rescue unit remains on site. Both the police and building control are now in attendance.”

A spokesman for Sussex Police said: “Police responded to a balcony collapse in MR Hove along with fire and ambulance. We took the initial call at 11.50pm.

“As a result of the collapse, four people have been hurt, and two were described as having serious injuries.

“The incident is not deemed suspicious by police, who are not investigating the cause of the balcony collapse. Building control were called to attend the scene.”

A spokeswoman for South East Coast Ambulance Service said: “We sent five ambulances and we treated four patients at the scene, two with serious injuries, two less so. All were taken to the Royal Sussex County Hospital.”