Brighton’s ugliest building to be demolished and replaced

Plans have been submitted to demolish and replace Anston House which is often described as the ugliest building in Brighton.

Property developer First Base and housing association Hyde Group have submitted a planning application to Brighton and Hove City Council.

They hope to build 229 homes, private and “affordable”, on the site as well as modern workspaces for almost 300 entreprenuers, many of them running start ups or growing small businesses.

They also hope to include 5,000 square metres of external space at Anston House which has been derelict since 1987.

The scheme is also expected to generate £139 million of economic activity including 344 construction jobs, with new residents expected to spend more than £6 million in local shops and businesses. 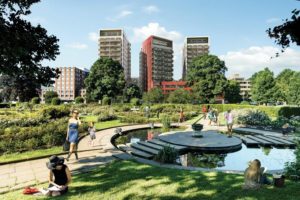 “First Base have received good levels of support for the proposals to redevelop the site which will also offer substantial funding for additional school places, improving Brighton’s open spaces, public transport improvements and a £139 million boost to the economy during construction.

“Local designers Conran and Partners and Nicholas Dexter Studio have developed the proposals for the redevelopment of the Anston House site which has been derelict for nearly three decades and has been crowned the ‘ugliest building in Sussex’.”

First Base development manager Eeva Paasiaro said: “We take the views of local residents and businesses very seriously and we have responded with a scheme that will bring significant benefits to the Preston Park area and Brighton.

“We want to thank everyone who has commented on the proposals and provided their support.

“We look forward to working closely with stakeholders and the council over the coming months as the application progresses and to delivering these much-needed homes and workspace for Brighton.”