Do you recognise Brighton sex attacker from CCTV? 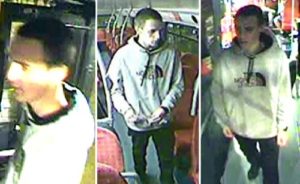 Detectives are asking the public for help in identifying the man who is believed to have tried to rape a woman last week after following her home.

They want to trace and interview the man who jumped on the 20-year-old woman in Auckland Drive, in Bevendean, shortly before 1.30am on Thursday 21 July.

The CCTV images are taken from the N25 night bus as it travelled between North Street, in Brighton, to the junction of Lewes Road and The Avenue.

The woman got off the same bus as the man who was described as white, 5ft 5in tall and wearing a light grey hoody and dark trousers.

Sussex Police said: “As she reached her own address and turned into the garden he jumped on her, but she screamed and he ran off.

“She was unhurt but very shaken and nothing was stolen.”

Detective Inspector Lee Horner said: “It is still an isolated incident. There have been no previous reports of anything similar to this in the area, or indeed in Brighton recently, and we want to identify and talk to this man as we feel he may have valuable information.”

Anyone who can help detectives is asked to phone Sussex Police on 101, email 101@sussex.pnn.police.uk or call the independent charity Crimestoppers anonymously on 0800 555111.