Police have released an e-fit image of a man they would like to speak to in connection with a number of reported sexual assaults through touching in Brighton. 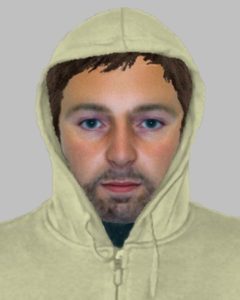 On Wednesday, 24 August two sixteen-year-old girls were walking in Carden Avenue near Darcey Drive at around 10.45pm when they were approached by a man. He touched them over their clothes before running off.

The suspect was described as being in his twenties, quite short and wearing a grey jumper and black trousers.

In a separate incident, a 20-year-old woman was walking in Preston Drove at around 11.15pm on Thursday, 25 August when a man ran up behind her and touched her before running off.

The suspect was described as white, around 25-years-old, 5ft 9in and of skinny build with brown hair and stubble. He was wearing a cream coloured hoody.

Brighton Police are also linking these assaults to similar incidents on 17 and 22 August.

Detective Constable Melanie Wauchope said: “All of the victims have been left shaken by these assaults and I would ask any witnesses to get in touch.

“Do you recognise this e-fit? Is it you? If you have any information about the man pictured we would also like to hear from you.”

Witnesses can get in touch by emailing 101@sussex.pnn.police.uk or calling 101 quoting Operation Hudson.