The mayor of Brighton and Hove was once a squatter, he told supporters of a housing and homelessness charity this evening (Wednesday 7 September).

Councillor Pete West said that he had “brushed with homelessness”, including a stint as a sofa-surfer when his life was “chaotic”.

Later he volunteered at the First Base Day Centre for the homeless, which is run by Brighton Housing Trust (BHT).

This evening he returned wearing the mayoral chains to help lead the celebrations for the 250th anniversary of the First Base building – St Stephen’s Hall, in Montpelier Place, Brighton.

And BHT boss Andy Winter thanked all those who support Brighton’s leading housing charity while, as always, encouraging further donations.

For more information about how to support BHT, click here. 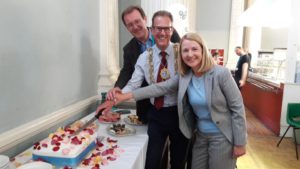 Here’s what the mayor said in his speech: “It is a pleasure for me to be at First Base once again. It is my first visit since becoming mayor but, as some of you may know, many years ago, back in the early 1990s, I volunteered here for a while.

“I have fond memories of the people I encountered then – both workers and clients – helping with lunch and playing hands of crib, listening to the personal stories.

“I had brushed with homelessness before volunteering. I squatted a flat for a while and sofa-surfed when my life was chaotic. I know it is all too easy for people to trip in life and fall into homelessness.

“What saddens me most is, in spite of some excellent work over the years by the city council, in partnership with many local organisations, including Brighton Housing Trust, a place like First Base is still needed, probably more so today than ever before. 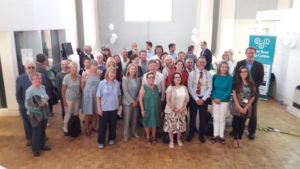 “Today we are here to celebrate both the work of First Base and the 250th anniversary of this wonderful old building.

“The history of St Stephen’s is fascinating, from assembly rooms, to a dance hall, to a chapel for a King and a Queen of England. Now a day centre for homeless people.

“What the future holds for St Stephen’s is unknown. It is currently in the ownership and stewardship of Brighton Housing Trust.

“So may I wish a happy birthday to St Stephen’s Hall and say thank you First Base and BHT for what you do to make Brighton and Hove a better place for all.”