A couple have been caught on camera stealing a laptop from a shop in Hove – and now the police want help to work out who they are.

Sussex Police released CCTV images showing the man and woman wanted for theft after cameras caught them in action in Staples in Davigdor Road, Hove.

The pair went into the shop at about 5.30pm on Saturday 3 September. Shortly afterwards, footage shows the man cutting a security wire holding the laptop to the display.

He briefly moves away, then returns and removes the laptop – an Acer model worth £279 – and puts it in a dark coloured bag carried by the woman.

The couple, who have two young children with them, then swiftly leave the store. 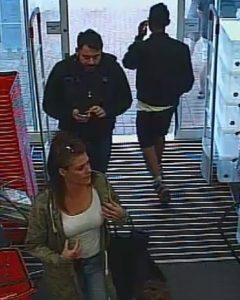 The man was described as white, about 5ft 9in tall, of muscular build, with black hair and facial hair. He was wearing a dark coat and black jeans.

The woman was described as white, about 5ft 7in tall, of slim build and with dark blonde shoulder-length hair. She was wearing sunglasses on her head, a light brown coat over a white top and light coloured jeans.

Anyone with any information is asked to phone Sussex Police on 101, email 101@sussex.pnn.police.uk or call the independent charity Crimestoppers anonymously on 0800 555 111.