Firefighters rescued someone still inside a burning house this afternoon. 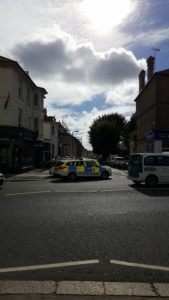 The fire broke out in Seafield Road earlier today.

A spokeswoman for East Sussex Fire and Rescue said: “Crews from Hove, Preston Circus and Roedean responded to a fire, persons reported, at a property in Seafield Road, Hove.

“On arrival, crews confirmed there was a fire. One person was rescued from the property and transferred into the care of the ambulance service.

“The cause of the fire will now be investigated.”

A police spokesman said: “Police were called by East Sussex Fire and Rescue Service at around 1.55pm on Thursday (22 September) following a fire at a property in Seafield Road, Hove.

“Emergency services remain at the scene and the road has been closed.

“The cause of the fire is currently unknown. It is believed one person has been treated for smoke inhalation.”