A man suspected of stealing a charity box from a Brighton supermarket has been caught on camera.

Now Sussex Police are urging him to hand himself in or those who know the man to name him.

The force has released a CCTV image of the man who went into Sainsbury’s in North Street, Brighton, at about 7.45pm on Wednesday 21 September.

He spoke with a shop assistant as he bought some items from the self-service till.

Sussex Police said: “During the conversation, he took a pair of pliers out of his pocket and cut the security chain on the box before leaving the store.

“He then returned three minutes later, picked up the unattached box – containing approximately £30 in cash – and left the premises. 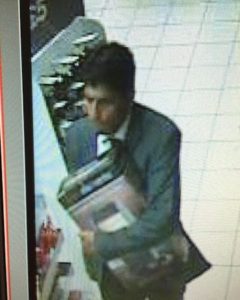 “The suspect is described as Asian, in his thirties, about 6ft, with short dark hair. He was wearing a smart grey suit.”

The man – or anyone who can identify him – is asked to phone Sussex Police on 101 or email 101@sussex.pnn.police.uk. Tip-offs can be left with the independent charity Crimestoppers anonymously on 0800 555111.