A busy Brighton road was closed for more than an hour after two cars crashed and firefighters cut three people from the wreckage this lunchtime. 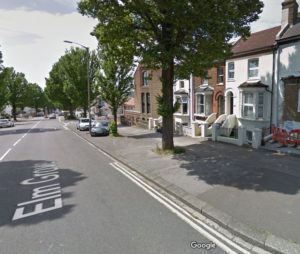 The crash happened at about 1.40pm today on Elm Grove, near the junction of Brading Road.

Firefighters worked for almost an hour to free three people from the wreckage. Two people, including a 70-year-old man with a head injury, were treated by paramedics and taken to hospital.

A spokeswoman for East Sussex Fire and Rescue said: “Brighton firefighters have cut three people free from the wreckage of two cars.

“At 1.41pm today (10 October) two appliances from East Sussex Fire and Rescue Service were mobilised to Elm Grove, in Brighton, where crews assisted at the scene of a collision.

“The stop message came in at 14.22 and the casualties have now been left in the care of paramedics.”

A spokesman for South East Coast Ambulance Service said: “SECAmb attended the scene with two ambulances and one paramedic car.

“Two patients, including a man aged in his 70s with injuries including a head injury, were assessed and treated at the scene before being taken to Royal Sussex County Hospital.”

Bus services were diverted until about 3pm.

⚠ Due to an RTC on Elm Grove, all services are diverting via Edward Street and Queens Park Road in both directions. ⚠

A police spokesman said: “Emergency services were called to Elm Grove near the junction with Brading Road, Brighton at around 1.35pm on Monday (10 October) following a collision between two vehicles.

“There are no serious injuries reported.

“The road was closed but reopened at around 2.40pm. Recovery work is still underway.”