Police are advising pranksters not to dress up as a clown and frighten strangers with a weapon after the force received numerous calls over the weekend from people feeling intimidated by the new trend. 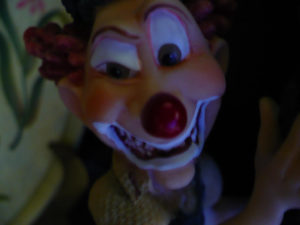 Inspector Simon Starns said: “We are aware this is a trend that has come over from America as Halloween is approaching.

“However while is not an offence to dress up as a clown and prank your mates, we don’t advise people to do this to strangers in the current climate of heightened security and it is an offence to carry an offensive weapon or an item which could be perceived to be a weapon.

“We will respond if someone feels threatened and the culprit could end up being arrested and then they won’t find it so funny.”

Last week police have received a report from a cyclist, who was riding north along the national cycle route to Golden Jubilee Way, Eastbourne, on Wednesday (October 5), about a person dressed as a clown who jumped out from a bush holding what he believed to be an offensive weapon.
The man didn’t speak to him and made no attempts to harm him but was still shaken by the incident.

Insp Starns said: “While we realise that reports of this kind are not restricted to just the Sussex area, the issues of intimidation, potential arrest and waste of public resources are the same across the country and we would urge people to refrain from such activity.”

The force added that as well as clown sightings such as the one in Eastbourne, it had also received several calls from people spooked out by images on social media.