The last piece of ancestral aboriginal remains kept by Brighton Museum has been returned to the Austrialian community it’s believed they were taken from in a special handover ceremony. 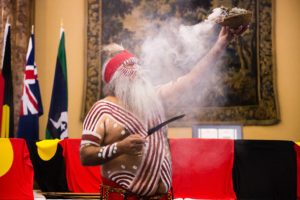 The skull water vessel and other remains were given to the museum by scientist and collector Frederick William Lucas in November 1925, part of a large group of osteological and ethnographical items he had loaned to the museum in 1922.

In 2008 the council agreed to hand back two skulls and two femora (thigh bones), to the Ngarrindjeri Community of South Australia, from whom historical information suggests they were taken, following a request in 2005 from the Australian Government.

These were handed back at a ceremony outside the museum in May 2009. Later the same month, the council agreed to also return the skull vessel and on Friday it was given back at a special handover ceremony at Australia House in London.

The cup was received by Mr Major Sumner, elder and representative of the Ngarrindjeri Community. The ceremony, organised by the Australian High Commission, was attended by Councilor Alan Robins and museum director Janita Bagshawe.

The Australian High Commission have said: “It is both a symbolic gesture for both parties and an important part of the healing process for the descendants of the ancestors being brought back to their homeland to rest.”

Cllr Robins, chair of the council’s Economic Development and Culture Committee, said: “The city council is very pleased to be in a position to return these remains to their rightful home, and the ceremony was a very special and moving experience.

“The return of the Old Person’s remain is very important to the Ngarrindjeri Community to ensure their ancestors are finally able to rest in peace in their homelands.”

The repatriation is part of an Australian Government programme to assist indigenous communities in pursuing the unconditional return of ancestral remains held in overseas collections and within Australia.

So far, more than 1,000 indigenous Australian ancestral remains have been returned from the United Kingdom to traditional custodians with the support of the Australian Government’s Indigenous Repatriation Program.

The council has received a Handover Certificate, a formal record of the transfer of the remains to the Ngarrindjeri Elders representing their community.