Detectives are hoping to identify this man who is believed to be connected to a robbery in Brighton. 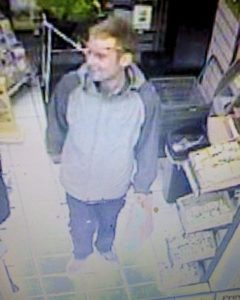 Police were called at 2.55am on Monday morning (October 17) to a report a man had been attacked and injured on The Level in Brighton. The victim, a 23-year-old man from Brighton, was taken to hospital with an injury to his face and body.

The victim’s tobacco, mobile phone, watch, bank card and a small amount of cash was stolen.

The stolen card was used at Budgens on Queens Road, Brighton and CCTV shows this man in the shop around the time the card was used.

Detective Sergeant Cheryl Lewendon said: “We are keen to trace this man and talk to him about the robbery at The Level. The victim has multiple fractures to his face.”

Anyone who saw what happened or recognises this man please contact police on 101@sussex.pnn.police.uk quoting serial 102 of 17/10.