A Hove man was robbed in his own home after answering a knock at the door, Sussex Police said this afternoon (Monday 24 October).

A man armed with a knife threatened the victim and stole his Rolex watch and iPhone in the robbery which happened 11 days ago on Thursday 13 October at about 3.15pm.

Police published an efit of the suspect today. He was said to have run off northwards, up Brunswick Place and Furze Hill.

The suspect was described as 20 to 22 years old, about 5ft 10in tall, slim, with tanned skin and a black beard. He was wearing a grey hooded top and tracksuit bottoms. 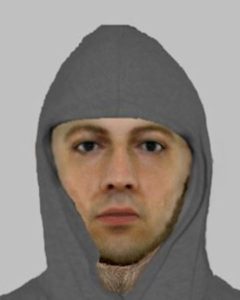 Detective Constable Sarah Townsend said: “Thankfully the victim wasn’t injured but was shaken by what happened.

“The Rolex watch was a 21st birthday present and was made in 1995 and has sentimental value for the victim.”