An armed robber fled empty-handed after trying to steal money from a Brighton supermarket.

Sussex Police said this afternoon (Thursday 27 October): “Witnesses are sought to an attempted knifepoint robbery at a Brighton store.

“At about 10.30pm on Sunday, cashier staff working at Sainsbury’s in Carden Avenue, Brighton, were approached by a man who threatened them with a knife and demanded money.

“The suspect is described as white, of stocky build, about 5ft 9in, wearing a dark-coloured Parka-style jacket with the hood pulled up, a black scarf pulled up, covering his face, and Nike trainers with a white sole. 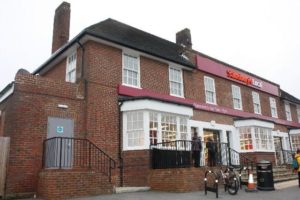 “The knife is described as having a pinky-red blade and handle.

“However, no cash was handed over and the man fled on foot.”

Detective Constable Steve Smith said: “The member of staff directly threatened was very shaken by the experience but fortunately was not hurt.

“If you were in or around Carden Avenue that Sunday evening at about 10.30pm and saw this man either entering or running away from Sainsburys please contact us.”