Police are to patrol the Prestonville area of Brighton after a man flashed at four young Brighton schoolgirls on Tuesday as they walked home. 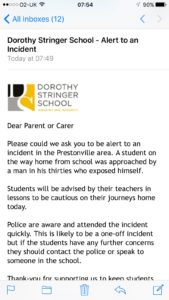 Schools have put out a warning after the incident, which happened near the railway lines on Dyke Road Drive.

A police spokesman said: “A man exposed himself to four young schoolgirls in Brighton on Tuesday (November 1).

“The girls were walking home from school just after 4pm when they saw the man standing on the side of the road where Dyke Road Drive crosses the railway lines into Brighton station. He stared at them before exposing himself.

“He is described as white, around 30, 6ft, of skinny build with dark facial stubble and a shaved head. He was wearing a plain black hooded top, black tracksuit trousers and black shoes. He did not approach or try to contact the girls and was last seen heading down Dyke Road Drive towards London Road.

“PCSOs have been tasked to attend the area for high visibility patrols.

A warning was sent out this morning by Dorothy Stringer, one of the nearby schools. Giles Ward, head of lower school, said: “Students will be advised by their teachers in lessons to be cautious on their journeys home today.

“This is likely to be a one-off incident but if the students have any further concerns they should contact the police or speak to someone in the school.”