Traffic delays on seafront after lorry brings down lamp post 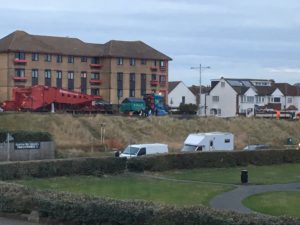 The accident happened at around 4pm today, resulting in the closure of the road in both directions for a short time.

Terry Wing, who saw the aftermath of the crash, said: “A very large lorry has brought down a large ornate lamp post and no traffic is moving in either direction.”

Police arrived at the scene and traffic was moving again by 4.20pm.

A spokeswoman for Sussex Police said: “Shortly after 4pm on Tuesday (8 November) a lorry hit an electricity pole in Kingsway, Hove, and the westbound carriageway was blocked.

“There are no reports of injuries, EDF Electricity are attending.”