Do you recognise these men who stole phones from shops in Brighton and Hove? 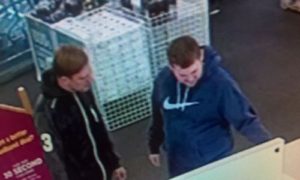 At 1pm on Friday (November 4) two men went into the Currys PC World on Western Road in Brighton. One stole the iphone 7 phone while the other kept a watch out for staff. They then both left.

At around 1.15pm on the same day, the same two men went to the Currys PC World on Old Shoreham Road, Hove and again stole an iphone 7.

Please email 101@sussex.pnn.police.uk quoting serial 683 of 04/11. You can also report online to https://sussex.police.uk/contact-us/response-to-appeal/ or call 101.