A Brighton councillor was honoured at Buckingham Palace today (Friday 11 November) when he collected an award from Prince William.

Steve Bell, 61, who represents Woodingdean on Brighton and Hove City Council, was made a CBE for political service in the Queen’s Birthday Honours List.

Councillor Bell said: “I was overwhelmed at the atmosphere and ambience of the whole experiencetoday, meeting people from all walks of life and seeing how much work other people do, helping the life of our nation.”

Councillor Bell, a former south London barrow boy went on to become a WO2 – or warrant officer – as a Company Sergeant Major in the Queen’s Regiment before turning to politics.

He said: “The Duke of Cambridge (Prince William) asked why, when I’d finished in the Army, I went into politics. I said I’d always served and I believe everyone should serve.

“My first real posting in the Army was to Preston Barracks in Brighton – in 1986. That’s when I fell in love with Brighton.” 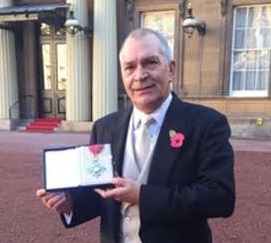 Prince William presented Councillor Bell with the insignia of a Commander of the Most Excellent Order of the British Empire – or CBE.

His political service included his role as president of the National Conservative Convention. He is now the voluntary party national campaign by-election co-ordinator.

The ceremony in the main ballroom at Buckingham Palace was watched by Councillor Bell’s fiancée Maria Caulfield, a former Brighton councillor who now serves as the MP for Lewes, Councillor Bell’s mother Eileen and his daughter Bobbie.

When his award was announced in June, Councillor Bell said: “I am immensely honoured and humbled to have been appointed a Commander of the Order of the British Empire in the Queen’s Honours List on the occasion of Her Majesty’s 90th birthday.

“I didn’t expect or foresee that my national political service would be recognised nor that I would be appointed CBE. 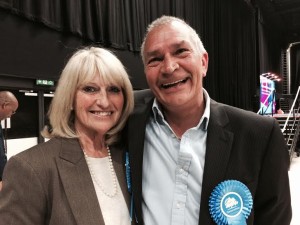 “It is a testament, coming from my background of a barrow boy from Woolwich, south east London, to being involved in politics at the highest level and sitting on the Conservative Party Board, that my party recognises people’s abilities from all walks of life.

“I have tried to keep myself grounded by keeping in touch and working with the grassroots throughout my career and by maintaining an involvement with local politics.

“That is why last year it was another red letter day for me when the people of Woodingdean elected me as a councillor to serve them on Brighton and Hove City Council.

“The CBE to me is the icing on the cake and I will never forget that my number one priority must be and always will be to serve the people of our nation.”

As well as his other posts in the party, Councillor Bell has previously served as vice-president of the National Conservative Convention and chaired the Brighton Kemptown Conservative Association.