Dozens of people gathered at the war memorial in Hove yesterday afternoon (Sunday 13 November) even though the annual Remembrance parade had been scrapped.

There was some disappointment that the parade was dropped in the year that marked the centenary of the Battle of the Somme.

And there were suggestions that the parade could be revived next year, including from at least one Hove councillor, Ken Norman.

The annual Service of Remembrance went ahead though with hundreds of people at All Saints Church in Hove including the Mayor of Brighton and Hove, Councillor Pete West.

@KristyAdamsBlue It's a shame the Hove parade didn't happen this year bearing in mind the massive increase in attendances everywhere else!

@KristyAdamsBlue Perhaps more support can be found to organise and reinstate next year?

Earlier, wreaths were laid at the Old Steine war memorial as a big crowd watched the parade in bright, dry and sunny conditions.

Ceremonies and services were also held in Rottingdean, Easthill Park, in Portslade, in Hove Cemetery – on the north and south side of Old Shoreham Road – and at the Middle Street synagogue in Brighton.

The first ceremony of the day was at the Royal Sussex Regiment memorial at the seafront end of Regency Square, Brighton.

The mayor said: “There was a large turnout at the Old Steine for Remembrance Sunday – a very good show of support from the public.

“Dozens of wreaths were laid by representatives of the services, veteran and many civilian organisations.

“There were also more on parade for the marchpast than I’ve seen in recent years.

“It is always particularly good to see so many young people taking part, including Cubs and Brownies, and Cadets. 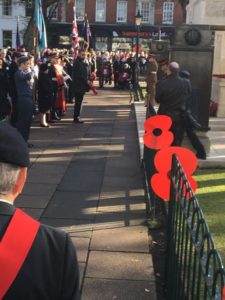 “My thanks on behalf of the entire city to all who work so hard to ensure these and the many other acts of remembrance continue to take place in Brighton and Hove.

“As veterans get older and fewer, fresh help is increasingly needed to support them and take forward Remembrance for the next generations. Please consider how you might able to help and get involved.”

On Friday (11 November) the i360 marked the Armistice with a free trip for veterans and by lighting the attraction in red and with a poppy design.