A man needed surgery for a broken jaw after being attacked in a Brighton night club. 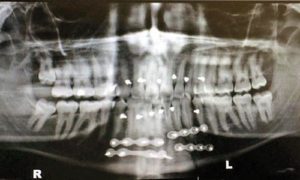 Sussex Police said: “This x-ray image shows what happened after a Brighton man was attacked at a night club in the city.

“The 20-year-old victim was in the smoking area of the Hub, in King’s Road Arches, in the early hours of Tuesday 1 November, when he was approached by an unknown man who accused him of kissing his girlfriend.

“The suspect then punched the victim once to the face, following which he spent three days in hospital where he underwent surgery for a broken jaw. This included titanium plates being inserted into the bone.

“Police are appealing for witnesses in a bid to identify the suspect, who is described as a white man aged in his early twenties, about 5ft 11in and of stocky build.

“He had blond hair which was gelled back and shaven at the back and sides and was wearing a short sleeved blue T-shirt and blue jeans.”

Anyone with any information is asked to phone Sussex Police on 101 or report it online at https://sussex.police.uk/contact-us/response-to-appeal.