A union boss has called for an official inquiry after thousands of football fans were stranded after Brighton and Hove Albion played Aston Villa because trains were cancelled at short notice.

RMT general secretary Mick Cash accused Southern bosses of “managerial incompetence” and said that he was disgusted by attempts to blame frontline staff.

Mr Cash said: “The dangerous chaos at Falmer after the game on Friday night was entirely down to the sheer managerial incompetence of Southern Rail.

“They were running short formations and cancelling services on the hoof due to their pathetic lack of advanced planning for this major fixture.

“The attempt to lump the blame on frontline staff who worked flat out to try and keep passengers safe is disgusting.

“RMT will be writing to the safety regulator, the Office of Rail and Road, this morning demanding a full investigation into this latest disgraceful and dangerous series of failures by the basketcase Southern Rail outfit.” 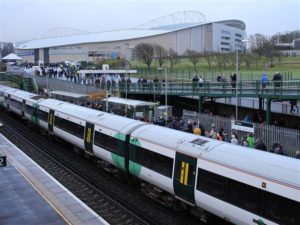 Brighton and Hove Albion said that the club wanted “to thank the majority of supporters from the club, and our visitors Aston Villa, for their patience when travelling home by train” from the match on Friday (18 November).

The club said: “With a capacity crowd at the Amex, Southern Rail made several late and unannounced cancellations just prior to the end of last night’s match, creating chaos for those using the train to get home.”

Albion chief executive Paul Barber said: “We would like to thank our fans, but also the supporters of Aston Villa, for their patience and understanding in frustrating circumstances.

“I would also like to thank our operations team for their hard work in very testing circumstances, and Brighton and Hove Buses for their assistance.

“It’s totally unacceptable for Southern Rail to leave passengers stranded in this way and we will be demanding a full explanation from them as to why they so badly let down supporters of both clubs.”

Southern said: “We apologise to Seagulls fans who were considerably inconvenienced while waiting for trains home after the match from Falmer Station.

“Unfortunately, we were unable to provide our usual additional service for home games due to a temporary shortage of train crew.

“We worked through the evening to try to provide cover for these trains but we were unable to on this occasion.”