Almost 200 people went along to a public exhibition of designs for new flats on the old Sackvillle Hotel site on Hove seafront today (Saturday 26 November).

The new proposed designs are for 64 flats in a building up to nine storeys high – half the size and density of the original plans for the site – at 189 Kingsway.

Hyde Housing said that the exhibition had been put together after six months of research and work from project designers HGP Architects.

The architects, Hyde said, had fully immersed themselves in the local community. This included the hosting of a series of design workshops where local residents were invited to give their input to ensure the new building “had a bit of Brighton and Hove about it”.

HGP Architects invited residents, local businesses and neighbours and looked specifically at creating a building that was sympathetic to the local environment.

The responses were much more positive today than when the housing association put forward plans for a 17-storey tower containing 107 flats at the site on the corner of Sackville Gardens. 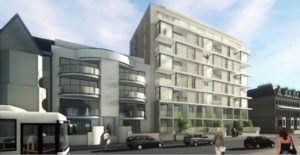 One neighbour Angelique Henderson said that she still thought the building was too high and the number of car parking spaces too few.

But Hyde pointed out that the plot was in a tall building zone and had been empty for ten years after the Sackville Hotel collapsed.

The housing charity said: “After gaining feedback from the local community from a previous proposal, Hyde pressed the reset button and started the design process again.

“Hyde heard residents’ concerns about the height and density of the previous design and this proposal is for a significantly lower building.

“Hyde turned to award-winning architects HGP to design the new scheme. HGP Architects have worked with the Hyde Group for ten years and have extensive experience in designing waterfront and residential buildings in the south of England.”

The next steps after the public exhibition will be to submit a planning application to Brighton and Hove City Council when further consultation will take place.

Tom Shaw, Hyde’s development director for the south, said: “We’re delighted to be presenting these plans to the local community. We’ve taken on board the ideas presented to us by the local residents.

“Six months of work from our architects has really paid off. This was a neighbourly effort and the proposed building looks fantastic.”

Guy Goodman, director of HGP Architects, said: “Context is all important. It’s not just about how people live with a building, it’s how that building lives in its environment. We wanted a scheme that enhanced the local area.”

Up to 40 per cent of the one and two-bedroom flats will be classed as affordable housing with the rest sold on the open market, offered to local buyers first.

The exhibition today took place from 11.30am to 4.30pm at the View Bar and Diner on Hove seafront, opposite the derelict site.

To read more about the scheme and take part in the public consultation, click here.