A Brighton park has been named the best park in England after a public competition to find the UK’s best loved green spaces. 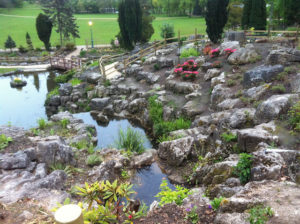 More than 10,000 people voted in the Fields in Trust awards, with most votes for the England category going to Preston Park Rockery.

The team who tend the park picked up their award at a ceremony last night at Lord’s Cricket Ground.

Garden Manager, Andy Jeavons said: “I have looked after the site for nearly 17 years and I have seen some wonderful changes during that time. Set among a beautiful backdrop of ornamental trees such as Handkerchief trees and Foxglove trees, the garden offers many different areas to explore. I love the winding stone pathways that twist and turn, offering a new area around each corner, whether that’s a small patch of secluded grass or the stunning views across north Brighton from the very top of the garden.

“And if all that wasn’t enough, I have a great team of volunteers who come along once a week to achieve all of this. People who given up their spare time in order to make the garden what it is and have become not only colleagues but wonderful friends over the years.”

Chair of the environment, transport and sustainability Cllr Gill Mitchell said: “It’s wonderful news that the Rockery has won Best Park in England. The rockery is a beautiful part of Brighton & Hove and the council staff and volunteers are getting the recognition they deserve for all their wonderful work on it.”

The rockery was also shortlisted for the UK’s Best Park award but lost out to Rouken Glen Park in East Renfrewshire.

Preston Park Rockery is Britain’s largest municipal rock garden, although only two acres in size the woodland area is planted up with 400 tree whips and 25,000 English Bluebells providing a haven for insects and birds.

The Fields in Trust Awards, now in their fifth year, are a celebration of the achievements of individuals and organisations who have worked over the last year to ensure that everyone has access to protected outdoor recreational space.

Helen Griffiths, Fields in Trust Chief Executive, said: “Many congratulations to Preston Park Rockery on being named the England winner of our UK’s Best Park, as voted by YOU! 2016 award.

“It’s a beautiful green space and well deserving of the accolade. The number of parks nominated this year and the votes cast across the competition show just how much the public cherish their local green spaces.”