Glam rockers Slade have had to cancel their gigs for the next few months after guitarist Dave Hill suffered a broken elbow when he collided with a cyclist in Brighton.

The 70-year-old was staying at the Grand hotel when he was hit just before Christmas and had to go to the Royal Sussex County Hospital where his arm was put in plaster.

The band’s agent Abbie Carter said: “Unfortunately, shows due to take place in January and February 2017 have had to be cancelled.

“Dave Hill, lead guitarist, has fractured his elbow after he collided with a cyclist while out walking in Brighton on (Friday) 23 December.” 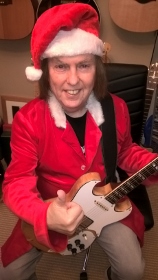 The accident happened the day after Slade’s final gig of the year – a sell-out performance at the Concorde 2 on Brighton seafront.