Guest column – Time for an Epiphany in the UK

Friday was the Twelfth Day of Christmas, the day when, traditionally, trees and decorations are taken down.

Some people take their decorations down before new year or at least before they return to work.

The photo below is of me dropping our tree off at the recycling point on The Level.

In the Christian tradition, it is also Epiphany, when the Magi, the Three Wise Men or the Three Kings from the Orient, however you wish to call them, visited the baby Jesus and, having been warned in a dream, an epiphany, returned home by a different route, thus avoiding Herod who has asked them to let him know of the whereabouts of the baby.

It was from that moment that Mary and Joseph realised that their lives and that of their son were in danger and they did not return home, rather fleeing to Egypt, thereby becoming refugees, until it was safe to return home.

In Britain there is a terrible confusion between immigration and asylum and, in certain newspapers, these terms are interchangeable. 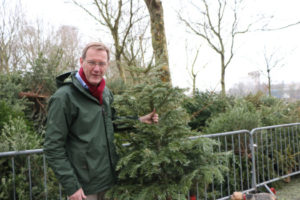 Andy Winter on The Level

Worse still is the phrase “illegal immigrants” to describe asylum seekers. An asylum seeker is someone who can expect protection under the Convention Relating to the Status of Refugees, also known as the 1951 Refugee Convention. It is a United Nations multilateral treaty that defines who is a refugee, and sets out the rights of individuals who are granted asylum and the responsibilities of nations that grant asylum.

As a South African who refused conscription into the apartheid army, I moved to Britain in 1979. I am an immigrant.

I could have sought political asylum had I not, through a complete accident of birth, been born to English-born parents.

Around 100,000 fellow young South African men were granted asylum in the late 1970s and 1980s. It is noticeable that the tabloids never complained about these asylum seekers “swamping” the UK.

Epiphany is also a moment of sudden and great revelation or realisation. I hope that in 2017 there will be an epiphany in the UK regarding those seeking refuge and asylum.

This can apply to those escaping war, particularly women (who are horribly under-represented in those arriving in the UK yet who often experience the worst abuses in conflicts).

It also can apply to people in our own country seeking refuge and asylum – women and children escaping domestic violence and abuse in the home, people with mental health problems – and a safe, warm and dry refuge for people living on the streets.

Andy Winter is a blogger and chief executive of Brighton and Housing Trust (BHT).