Councillor Morgan made the offer as he answered questions from the four at a Brighton and Hove City Council meeting at Hove Town Hall this afternoon (Thursday 19 January).

Elijah Peart, Max Coles-Morley, Seb Royle and Boudicca Pepper each asked the council leader about the impact of proposed cuts to youth services in Brighton and Hove.

He blamed the reduced grant given by the government to the council. Councillor Morgan said that spending cuts of £23 million had to be made in the coming year alone.

He offered to take the four teenagers to Downing Street in early February – the date is yet to be finalised. They are likely to take a letter or petition setting out their concerns.

Councillor Morgan said: “The blame lies with the government.”

He told the four at the council’s Policy, Resources and Growth Committee meeting this afternoon: “There are huge demands on our budget that we have to meet.” 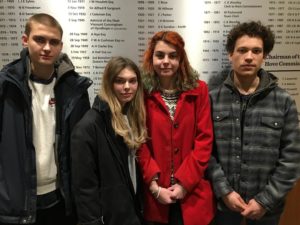 The council had to provide some service by law, he said, but not all of them were, adding: “We find ourselves in the position of not being able to afford such services.

“We would be investing in those youth services – not cutting them – if the government weren’t taking tens of millions of pounds out of our budget each year.

“The government do need to listen – not just to politicians like me – but to young people like you who will be affected by this.”

He said that he was inviting them to Downing Street to deliver their message to the government – “so that they understand the impact that these cuts are having”.

The council said this week: “The proposal is for a significant reduction of £800,000 on a net budget that is currently just over £1 million which would lead to the overall budget being just over £200,000.”

A consultation is under way until Sunday 12 February.