A new film starring Sherlock star Benedict Cumberbatch is being filmed in the grounds of the Royal Pavilion this week – but instead of the Oscar nominated actor, star-spotters have instead been treated to a llama and a zebra. 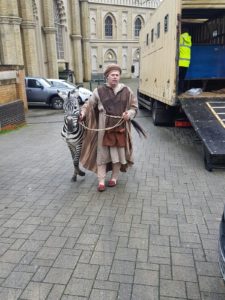 The Pavilion Gardens are currently awash with extras and actors wearing period costume for The Current War, the story of the rivalry between inventors Thomas Edison and George Westinghouse in their race to invent a marketable electricity system in the late 1800s.

The Gardens are being used for the recreation of the 1893 Chicago World Fair, which became a battleground for Edison and Westinghouse as they fought to win the contract to light the fairground at night.

As well as human actors, a llama and a zebra have been spotted being led onto the set but it’s not known whether Cumberbatch is going to make an appearance.

Cumberbatch plays American inventor Thomas Edison, and Michael Shannon his rival George Westinghouse. Edison championed the use of a direct current for electric power distribution over an alternating current, which was backed by Westinghouse Electric and a host of European companies.

Executive Producer Ann Ruark said: “This week production on upcoming film The Current War has come to Brighton. The Royal Pavilion has given us the ideal setting to recreate the 1893 Chicago World Fair, where Thomas Edison and George Westinghouse battled for who would provide electricity across the land.

“We are truly grateful to Brighton and Hove City Council for being so accommodating and welcoming us to the city.”

Alan Robins, chair of Brighton and Hove City Council’s economic development committee, said: “We’re pleased to welcome the filming team for The Current War to the Royal Pavilion this week and look forward to seeing the upcoming film when it’s released.

“Brighton and Hove is a fantastic location and has been the setting for many film and television shows. We’re always keen to explore opportunities to showcase the city to audiences around the world in this way.

“With 10 million visitors each year, Brighton and Hove is a popular destination and seeing local views on screen helps promote the city near and far.”

In 1878 the home of industrialist Lord Armstrong was the first house in the world to be lit using hydroelectric power. Two years later, it was Joseph Swan in Gateshead who beat Edison in the race to produce the incandescent bulb – considered the first “proper” electric light. 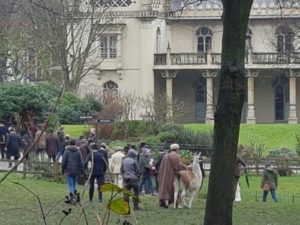 Among the other British actors in The Current War cast are Nicholas Hoult, Tom Holland, Katherine Waterston and Matthew Macfadyen.

The film been shooting on location since December 2016, with crews spotted at Waltham Abbey in Essex, around London and in Northumberland. 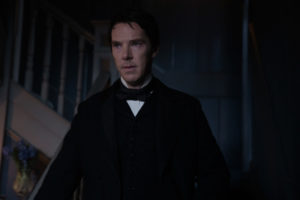 It is being produced by the Weinstein Company. Harvey Weinstein said: “Edison and Westinghouse’s rivalry is the ultimate tale of competition driving ingenuity. Theirs was a battle of intellect, a race of creativity and technological innovation that we see echoed in the self made inventors dominating spaces like Silicon Valley.

“We’re thrilled to start filming and to share this historical rivalry with audiences everywhere.”

Written by Michael Mitnick (The Giver), the film will be directed by Alfonso Gomez-Rejon (Me and Earl and the Dying Girl), with Basil Iwanyk (Wind River, Hotel Mumbai), Timur Bekmanbetov, and Harvey Weinstein producing, and Cumberbatch and Adam Ackland executive producing.

The Pavilion is closed from Tuesday 31 January to Friday 3 February 2017 and will re-open to the public on Saturday, 4 February 2017.