Police have released pictures of two men they would like to speak to in connection with a computer shop robbery in Hove. 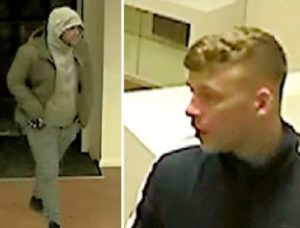 At 5.15pm on Tuesday, January 10, two men entered Solutions Inc in Old Shoreham Road and stole three computers worth around £2,800 that were on display in the shop.

It is believed that one of the suspects was seen to be carrying either a knife or a screwdriver. They ran from the shop after the security system was activated by a member of staff.

Anyone who recognises the men or who has information about the incident can report online here quoting serial 986 of 10/01.

Alternatively, you can contact the independent charity Crimestoppers anonymously on 0800 555 111.