8,000 runners race through Brighton in the Sussex Beacon Half Marathon

Norman Cook – aka Fatboy Slim – started the Sussex Beacon Half Marathon this morning (Sunday 26 February), sending more than 8,000 runners on their way.

Shortly after sounding the starting klaxon the DJ slipped into the pack to join friends taking part in the 13-mile race. He finished in about 1 hour 50 minutes. He said it had been great to hear all the cheers and at the Lagoon he joked it was tempting to break off and pop indoors for a cup of tea.

It took more than 15 minutes for all those taking part to cross the start line before Mayor Pete West started the youth races. The wheelchair racers were the first to get under way this morning.

The early fog was lifting as the pack headed from the start in Madeira drive, past the seafront statue of the Olympic runner Steve Ovett, up to St Peter’s Church and then towards Ovingdean.

The runners then double backed all the way along the seafront to Hove Lagoon, into the wind, before returning to the finish line in Madeira Drive.

First home was the men’s race winner Jonathan Tipper in 1 hour 8 minutes and 37 seconds, followed by Stuart Hawkes, six seconds behind, and Neil Boniface in third.

Paul Martelletti, who has won the event for the past four years, had to sit out the race with injury although he joined in with the commentary. 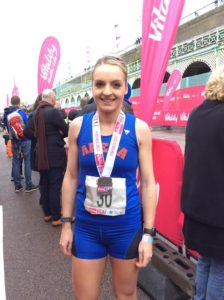 The Sussex Beacon charity organises the Vitality Brighton Half Marathon. It is the charity’s biggest annual fundraising event, raising about £250,000. But many of the runners were fundraising for other charities and good causes too. They included Water Aid, Scope, Rise and Chestnut Tree House.

The Brighton sick children’s charity Rockinghorse had a team of cheerleaders stationed by the Palace Pier to support the team taking part in the race.

Norman Cook at the Sussex Beacon Half Marathon