Four people are being questioned after a joint police and immigration raid on the Regency Restaurant on Brighton seafront this morning (Monday 3 April). 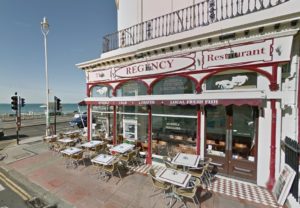 Police vans and cars were spotted outside the fish and chip restaurant in King’s Road from about 9am this morning. And after one man was arrested for entering the country illegally, his home in Western Road was searched where another man who has overstayed his visitor visa was found. Both these men are now being detained pending deportation to their home countries of Albania and Morocco respectively.

Two more men have been arrested on suspicion of dealing cannabis.

A police spokeswoman said: “Police have executed two warrants at a restaurant in King’s Road, Brighton, and a flat above it in a joint operation with UK Visas and Immigration on Monday morning (3 April).

“A third warrant is currently being carried out on a premises in Montague Street, Worthing. No more information is available about this warrant at this time.”

“Immigration checks on staff found that a 26-year-old Albanian man had entered the UK illegally. He remains detained pending his removal from the UK.

“Following the visit to the Regency, Immigration Enforcement then searched the 26-year-old man’s home address in Western Road, Brighton, where a second immigration offender was encountered. Checks revealed that the 32-year-old Moroccan man had overstayed his visitor visa. He was also detained pending his removal from the UK.

“People with information about suspected immigration abuse can report it at https://www.gov.uk/report-immigration-crime or call Crimestoppers on 0800 555111.

“Information to help employers carry out checks to prevent illegal working can be found at https://www.gov.uk/government/collections/employers-illegal-working-penalties. It includes a quick answer right-to-work tool to help employers check if someone has the right to work in the UK.”