At the police station in John Street, Brighton, at the force’s headquarters in Lewes and across the county, officers and staff stood in silence for two minutes to pay their respects.

Meanwhile, officers from Brighton and Hove joined colleagues from other parts of Sussex and around the country to line the route of the funeral procession.

Tens of thousands of others also took to the capital’s streets as a hearse took PC Palmer’s coffin from Westminster to Southwark Cathedral for his funeral service.

PC Palmer, 48, who was married with a five-year-old daughter, was killed while on duty outside Parliament by former Sussex University student Khalid Masood, 52, on Wednesday 22 March.

Masood, who was born Adrian Russell Elms, travelled from Brighton to London where he drove into people walking across Westminster Bridge, killing four people and injuring dozens of others, before stabbing PC Palmer. Masood was shot dead.

The eulogy was delivered by PC Palmer’s friend and colleague Chief Inspector Neil Sawyer who said: “Keith made the ultimate individual sacrifice to protect others.”

He said: “Keith throughout his service achieved his aim of making a difference and making London safer for all.

“But it would be while serving on the Parliamentary and Diplomatic Protection Group, which Keith joined in April 2016, that he would make the biggest difference.

“I have seen the photos taken by the many tourists with Keith where he is smiling, showing the good-natured side of our work. Typical Keith!

“This was because he liked to make people happy and it allowed him to show the job he loved so much in a positive light. 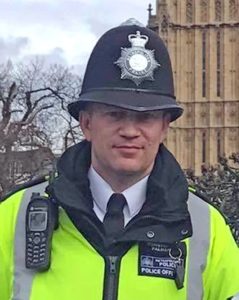 “As police officers, we go to work every day knowing that we may be called upon to put our own lives in danger. And many do.

“And on Wednesday 22 March 2017, Police Constable Keith Palmer did just that to protect life and to protect Parliament – and he did not waver.

“He stood firm and made that ultimate sacrifice in doing his duty. A hero to us all, we are all very proud of him.

“During Keith’s policing service he met and worked alongside many officers and left a positive impression on all. And we will all miss him greatly.

“I know this because over the last couple of weeks so many of these colleagues and friends have told me as much.

“His spirit will never leave us and he will remain an inspiration to us all.

“Keith’s blue lamp will shine bright forever … Keith made a difference and we will not forget.”