A 25-year-old man fled from a court just weeks after being sentenced for spitting at two female detectives in a Brighton court.

Now Sussex Police are trying to find the missing defendant, Matthew Johnson, 25, a roofer, of Hillside Avenue, Broadwater, Worthing.
The force said: “Police are asking for the public’s help to trace 25-year-old Matthew Johnson from Worthing who is wanted after he fled court on Tuesday (9 May). 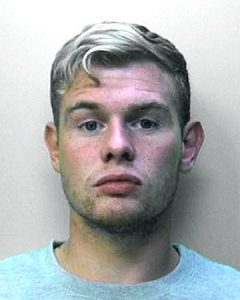 “Johnson was due to stand trial at Lewes Crown Court in relation to a serious assault against a woman back in August 2016 but left before the trial started.

“Johnson is described as white, with blond hair, 5ft 10in and of muscular build.”

He was also ordered to pay prosecution costs of £620 and a £20 victim surcharge.

He is alleged to have attacked a woman, leaving her in need of hospital treatment.

He is due to stand trial for assault by beating, assault causing actual bodily harm (ABH), sexual assault, criminal damage caused by smashing a woman’s mobile phone, harassment, putting the woman in question in fear of violence, driving while disqualified and driving without insurance.

When caught, Johnson is expected to be kept in custody until he can be brought before Lewes Crown Court.

Sussex Police said: “Anyone who sees Johnson or knows of his whereabouts should call Sussex Police on 101 quoting serial 657 of 09/05.

“Alternatively you can contact the independent charity Crimestoppers anonymously via https://crimestoppers-uk.org or call 0800 555111.”