Driving the fifth bus in the Albion’s promotion parade on Sunday – named after Albion groundsman and fan Matthew Grimstone – was a particular source of pride for one Brighton and Hove Buses employee. 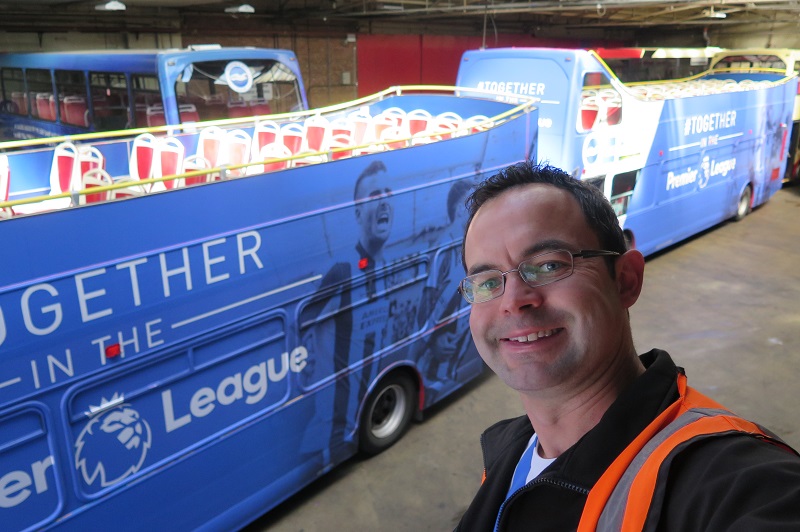 The driver, David Grimstone, was older brother to Matthew who at the age of 23 was tragically killed in the Shoreham Air Disaster in August 2015.

David said: “I just wanted to give something back to the club, to thank them for everything they’ve done for my family since my brother was killed.

“When the opportunity came up to drive the bus named after my brother in the procession, I knew how much I wanted to help out and be involved in the day. It was a very long day but it was an absolute privilege to be part of the celebrations.”

The club had been enormously supportive to his whole family after the tragedy, from the players all the way to the chairman, David said.

David, whose job involves manually updating bus stop information around the city, was offered the chance to drive the bus named after his brother in the parade by his employer Brighton and Hove Buses – who supplied the buses for the procession. The Matthew Grimstone bus carried Albion staff and managers from Dukes Mound at Madeira
Drive to Hove Lawns.

He said: “Matthew would have been really pleased with Albion’s promotion. He was a really big fan.”

David’s brother Matthew joined the Albion at the age of 16 as a Stadium Assistant at their former ground in Withdean. He then took up an apprenticeship as a groundsman at Falmer training ground before the club moved to the Amex Elite Football Performance Centre at Lancing. Altogether he worked for the club for seven years.

Pensioner in critical condition after car crashes into Portslade house