Work is under way to replace hundreds of old communal bins across Brighton and Hove after checks showed many of the existing 600 were in need of replacement.

The new bins also have clearer signs about what should and shouldn’t be put in them. 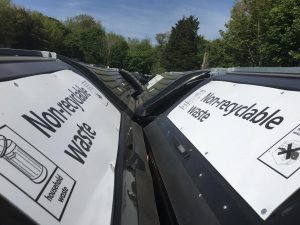 Brighton and Hove City Council said: “Hundreds of new communal refuse bins will be rolled out in Brighton and Hove over the next few weeks, replacing those which have been badly damaged or broken.

“The 330 bins were ordered after an audit last year which revealed that just under half of the 600-strong stock was ready for replacement.

“Work to exchange the old for new bins has begun and will be carried out city-wide over the next two months.

“The new 3,200-litre bins carry information signs letting residents know what can and can’t go into them and that CCTV operates in some areas as part of the council’s crackdown on fly-tipping.

“Residents are reminded that bulky waste can be taken to either of the household waste recycling sites or via the chargeable bulky waste collection service provided by the council.

“There are also several charities in the city which will take furniture and other items, with some offering free collection.

“They include the Martlets Hospice, British Heart Foundation, Emmaus and YMCA.

“Trade waste is not allowed in any council provided bin, unless the business is taking part in the council’s new chargeable commercial waste service. 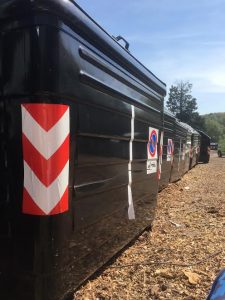 Councillor Gill Mitchell, who chairs the council’s Environment, Transport and Sustainability Committee, said: “The new bins are part of our continued effort to effectively manage the city’s waste and recycling needs while smartening up our city streets.

“The new signage makes it clear what people should and shouldn’t put into them and will hopefully encourage people to be responsible with their refuse.

“Misuse of communal bins affects all residents as ultimately the cost of clearing up trade and fly-tipped waste contributes to households having higher council tax bills.

“Fly-tipping is something we are striving to reduce so the use of CCTV reaffirms our message that selfish, irresponsible behaviour that causes our communities to look a mess will not be tolerated.”

For information about where to take bulky waste and how to dispose of trade waste, visit http://www.brighton-hove.gov.uk/content/environment/recycling-rubbish-and-street-cleaning/bulky-waste-collection.