The show – from the team behind the long-running Treason Show – is being staged in the Bosco Theatre at the Spiegeltent as part of the Brighton Fringe.

The hour-long production is a love story set against the backdrop of delayed and cancelled trains resulting from the strikes, overtime bans and poor management characterising Southern over the past year.

Artistic director Mark Brailsford said: “The Southern Rail crisis is one of those rare political issues that has affected absolutely everyone in our community – whether daily commuter, local business or part-time passenger.

“I don’t know anyone in Brighton who has managed to avoid the damage it has done.”

Writer Simon Levenson said: “I suffered the daily journey from Hove to Croydon throughout 2016 so was not lacking in inspiration when writing the show.

“When the circumstances around you are that absurd, it really just lends itself to satire.

“Commuters won’t forget any part of this crisis in a hurry and we really felt they deserved a bit of comedy relief and catharsis.”

Both men have collaborated with the Association of British Commuters (ABC) at protests over the past year. The campaign group is taking the government to court over the way that it has dealt with the Southern franchise.

And a song called Imagine There’s No Southern went viral, with more than 250,000 viewings on social media. 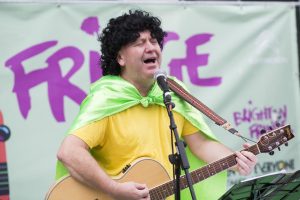 Brailsford performed the parody song on the piano at Brighton Station to mark the first anniversary of the dispute over the role of guards on trains.

As well as performances at the Spiegeltent at 4.30pm today and tomorrow (Saturday 3 June) the show will be staged at the Ropetackle Arts Centre, in Shoreham, on Saturday 10 June and at Brighton’s Sallis Benney Theatre on Saturday 24 June.