Eddie Edwards, 53, was the guest speaker at the lunch – known as the Best of British – held at the Grand hotel last Friday (2 June).

Rockinghorse said: “The former ski jumper, who won the hearts of the nation in the 1988 Winter Olympics held in Calgary, Canada, addressed almost 500 guests from local businesses.

“Now an after-dinner speaker, Mr Edwards recalled his most famous moments and also spoke about the recent film made about his life, Eddie the Eagle, which received a number of award nominations.

“He also spent time chatting to guests during the drinks reception and having pictures taken. 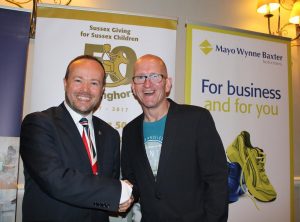 “The charity sporting lunch has become a consistently sold-out event and a highlight in the calendar for many local businesses in the city.

“Sponsored by Mayo Wynne Baxter, guests enjoyed a three-course meal with wine and dug deep to give generously in the raffle and auction.”

Rockinghorse is celebrating its 50th anniversary this year and aims to raise £500,000 during its golden jubilee, to be split between 10 children’s centres and paediatric services in Sussex.

The charity said: “The ‘Sussex Giving for Sussex Children’ initiative will help improve, refurbish and develop the environment for the young people benefiting from the supported projects.”

Rockinghorse chief executive Ryan Heal, the organiser of the Best of British event, said: “For any charity to be going strong for 50 years is quite incredible.

“When Dr Trevor Mann started Rockinghorse in the late Sixties, I’m sure he would be proud that his vision is still going strong at events like Best of British show.

“Through our golden jubilee appeal, we are providing vital support to centres and services for young people in Sussex and are extremely grateful for the generosity shown at our sporting lunch.”

He said: “Next year’s Best of British promises to be even bigger and better as the event celebrates its 10th anniversary.”