A Brighton primary school has received a disappointing Ofsted report under the tougher inspection framework having previously been graded good.

Ofsted told Moulsecoomb Primary School that it “requires improvement” – the third best grade out of four.

The school, in The Highway, Moulsecoomb, was rated good – the second best grade – for its early years provision and he effectiveness of its leadership and management.

But for pupil outcomes, the quality of teaching, learning and assessment and personal development, behaviour and welfare – as well as overall – the school was told it requires improvement.

Ofsted said: “Instability with leadership and staffing has resulted in a slow rate of school improvement since the previous inspection. As a result, standards have declined.

“In the past, governors have not addressed key issues quickly enough. Furthermore, governors’ efforts were hampered by difficulty recruiting a head teacher.

“Pupils’ achievement is highly variable across the school. Too few, particularly in key stage 1, achieve the standards expected for their age.

“The overall quality of teaching is variable. Some teachers have not yet acted on leaders’ good advice.

“Some middle-attaining pupils are not making sufficient progress because work is too easy. Some teachers do not set tasks which demand enough of these pupils.

“Attainment in Year 2 is not rising quickly enough. Too many pupils in the school are not well prepared for key stage 2.

“A minority of pupils are inattentive during lessons. These pupils are not yet sufficiently self-motivated to concentrate fully.

“The proportion of pupils persistently absent across the school is too high.” 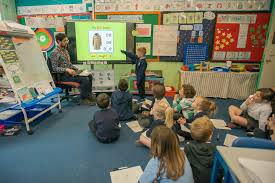 “Stronger teaching within the school is now ensuring that pupils make better progress, particularly in Year 6.

“Leadership of safeguarding is exemplary. Pupils are kept safe and say that adults resolve issues quickly. Parents agree that their children are well looked after.

“Effective use is made of pupil premium funding. Disadvantaged pupils are making good progress this year across the school.

“Children benefit from a stimulating environment and skilled teaching in the Reception classes. Leaders’ actions ensure that children attain well.”

Brighton and Hove City Council members were told yesterday (Monday 19 June) that the school was improving but that this had not yet fed through to results.

The council’s Children, Young People and Skills Committee was told that the school was rated good when it was last inspected four years ago.

But by the time Ofsted returned in March the inspection regime had been toughened.

The council’s head of standards and achievement Ellen Mulvihill said that she would hope that progress currently being made would mean the school being rated good when it was next inspected.