The West Pier has been illuminated by a light show two nights running, prompting online speculation about the reason for the display. 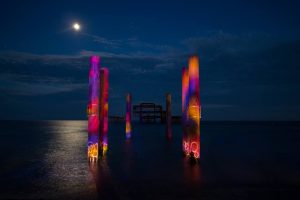 The pier was lit up last night (Thursday 6 July) and the night before, with Facebook user Andy Garner posting colourful photographs of the beautifully illuminated remains in the Brighton People group.

The images show bright colours and abstract shapes projected on to the ruined pier. 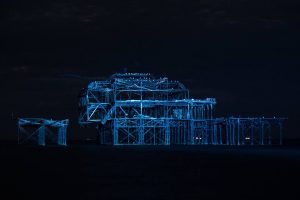 The light show was designed by Production Bureau, an agency specialising in events, creative work and communications.

The agency said: “We produced the event for a corporate client and we are unable to share their details. This would breach our contract with them.

“We are based in Norwich and Edinburgh and have been staging conferences and events in Brighton for 30 years. It’s the first time we have worked in the event space at i360.” 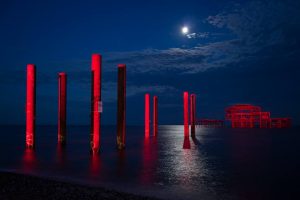 Production Bureau tweeted: “We had an amazing time lighting up the west pier from the @BA_i360 @Pb_Ltd @PbScotland #Brighton #lighting #eventprofs #tech”

The West Pier Trust said: “Although the event is not connected with the trust, we always like to see the pier ruin illuminated. It looks wonderful and is popular with residents and visitors.”