Health chiefs have started a campaign to encourage children to exercise over the summer holidays.

It was announced just days after a report to the Brighton and Hove Health and Wellbeing Board showed that almost one in five local four and five-year-olds was overweight.

The campaign by Public Health England is targeting children across Sussex and Surrey. It follows research suggesting that school-age children are not doing enough physical exercise and their weight is increasing as they go through school.

In Brighton and Hove the proportion of children who are overweight and obese rises as they progress through school.

However, the figures in Brighton and Hove are better than the national average of 34.2 per cent and 22.1 per cent overweight children in England respectively.

Health chiefs hope to incentivise children to be more active by carrying out 10 minute bursts of exercise for fun over the summer.

They are promoting “10 minute shake ups” – a Change4Life initiative in partnership with the Walt Disney Company, Sports England and schools.

The scheme is “encouraging school children to do more exercise with a little bit of help from Elsa, Lightning McQueen and other Disney friends”.

Angela Baker, deputy director of health and wellbeing for Public Health England South East, said: “It is worrying that we are seeing so many more children leave primary school overweight than started, and we hope our Disney-inspired programme is one way of helping to reduce this.

“Any 10-minute burst of activity counts as a ‘shake up’ and goes towards the hour of physical exercise each child should do each day. 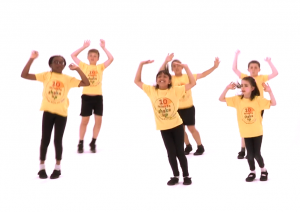 “The idea is to encourage children to spend some of their long summer days doing activity which keeps them healthy as well as having fun.”

Every primary school pupil in Brighton and Hove will receive worksheets styled as passports and suitcases.

Lessons will be delivered before the summer holidays for children to design their own exercises to do over the summer.

Public Health England said: “Children will be able to ‘stamp’ their passports with stickers every time they do 10 minutes of activity and pack their suitcase with ‘shake up’ ideas they have developed in class.”

And the good work won’t stop after summer. Public Health England said: “In the autumn term, more Change4Life lesson plans and activities will be available on the School Zone to keep pupils active throughout the school day.”