Double yellows for road made ‘impassable’ by displaced parking

Scores of cars displaced by new parking zones which have made a narrow Brighton road “impassable” will have to find a new home next week after double yellows are painted along it. 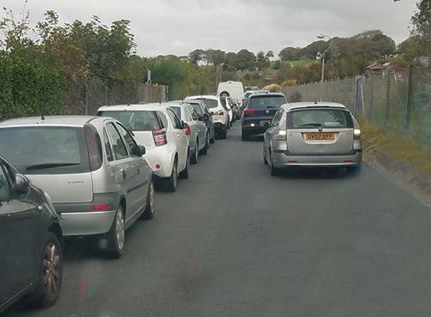 Tenantry Down Road has become clogged up with cars and vans since road markings and signs for new parking zones have popped up in Hanover and Elm Grove.

Today, the day on which the scheme was meant to start being enforced, people trying to drive down the narrow road have complained that they have made it almost impossible to get past.

But on Monday, the vehicles will need to find a new home, as double yellows are due to be painted both there, and along Bear Road – with new four-hour waiting bays scattered along to allow people using the allotments space to park.

One motorist, Cliff Faires, said: “I spent over ten minutes trying to get through this road from Elm Grove to Bear Road. The whole road has become a car park.

“It is almost impossible to get through. You need to fold your wing mirrors in.”

A council spokesman said: “The council was aware of the potential for vehicles to be displaced onto Tenantry Down Road, which is outside the parking schemes.

“As a result there will be a combination of four-hour limited waiting bays and double yellow lines.. This would allow users of the allotments to park for up to four hours but would prevent all-day parking in this road.

“The road markings will be done on Monday October 16, with enforcement shortly afterwards – at a date be confirmed.”

The double yellow lines will be painted the length of Tenantry Down road on the eastern side, with four-hour parking bays running along most of the western side.

Double yellow lines will also be painted on both sides of Bear Road from the junction of Bevendean Road to Tenantry Down Road.