Brighton Kemptown seat to include Newhaven and Seaford under boundary review

Brighton Kemptown will stretch as far east as Newhaven and Seaford under proposals put forward in a boundary review.

But the parliamentary constituency – to be called Brighton Kemptown and Seahaven – will lose the Brighton and Hove City Council ward of Moulsecoomb and Bevendean which will switch to Brighton Pavilion.

In turn Brighton Pavilion will lose Regency Ward which will become part of the renamed Hove and Regency constituency.

The Boundary Commission proposals have been revised after public hearings were held in Brighton almost exactly a year ago.

Earlier proposals suggested the creation of a new Brighton East and Newhaven constituency while Brighton Pavilion and Hove were to be redrawn as Brighton North and Brighton Central and Hove.

The initial proposals came in for criticism and Boundary Commission England said: “The proposals for this area prompted more opposition than anywhere else in the region, with the key objections to the proposals being the division of Hove between two constituencies, having a ‘Brighton North’ constituency with no connection to the sea and no meaningful community ties or transport links between its east and west parts and dividing Woodingdean from the other ‘Deans’ areas of east Brighton, with which it shares strong links.

“There was also opposition to extending the eastern part of the Brighton East and Newhaven constituency to Seaford, where a number of respondents felt that their ties are more towards Eastbourne.

“The Hands Off Hove campaign, opposing our initial proposal to transfer Hove Park ward to a Brighton North constituency, was signed by 4,515 individuals during our initial consultation period.

“As they said, ‘Brighton and Hove may be partners in the formation of the city but they vigorously maintain their separate and distinct identities.’

“These sentiments were reflected across the bulk of representations mentioning Hove.

The boundary review is the result of a plan to reduce the number of MPs in the House of Commons from 650 to 600.

In the south east the Boundary Commission proposes cutting the number of seats from 84 to 83 although dozens of constituencies are likely to have redrawn boundaries.

The aim is for each MP to represent between 71,031 and 78,507 voters with constituencies aligned where possible to councils, wards or – at worst – polling districts. 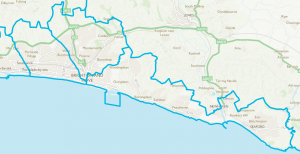 The proposed Brighton Kemptown and Seahaven constituency, for example, does not include one of the polling districts in Newhaven.

Politically, the Brighton Kemptown and Seahaven seat will lose almost 10,000 voters in the predominantly Labour ward of Moulsecoomb and Bevendean.

But the five Seaford wards have more than 18,000 voters who have traditionally returned Conservatives and a few Liberal Democrats.

Brighton Pavilion will gain the predominantly Labour-supporting Moulsecoomb and Bevendean while losing Regency which is currently served by two Green councillors.

Labour will fancy their chances in both Brighton constituencies. The Tories, though, will be hopeful of victory in the east while the student population in Moulsecoomb and Bevendean could help the Greens retain their only seat in the House of Commons.

The proposed Hove and Regency constituency may become even harder for the Conservatives to win back if Labour retains Peter Kyle as the party’s candidate.

It said: “We encourage everyone to use this final opportunity to contribute to the design of the new constituencies.

“The more public views we hear, the more informed our decisions will be when we make recommendations to the government.

“We ask everyone wishing to contribute to the design of the new constituencies to first look at the revised proposals report, and accompanying maps, before responding to us.

“The best way to respond to our revised proposals is through our consultation website www.bce2018.org.uk.”