A drunk fare dodger who borded a bus with a bottle punched a driver who challenged him so hard in the face the driver was left needing stitches to the inside of his eye. 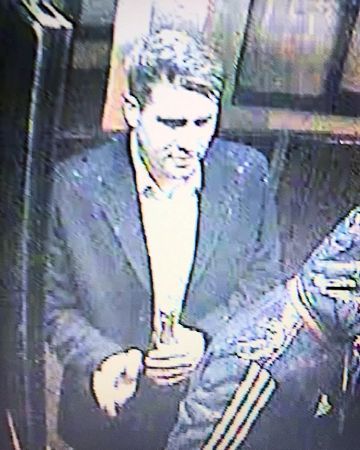 Police have released this CCTV image of the suspect, and have asked any witnesses to come forward. The driver is still off work recovering from his injuries.

The attack happened on the number 6 bus in Western Road, Hove, at around 11.35pm on Wednesday 17 January.

The victim, in his 50s, suffered a deep cut just to the inside of his right eye, which had to be stitched, and heavy bruising and swelling.

His assailant is described as a white man, aged 25-35, 6ft, of medium build and with short brown hair swept over at the front. He was wearing a suit style jacket, white shirt and dark trousers.

He boarded the bus opposite the Waitrose supermarket on Western Road, Brighton, and attempted to travel without paying. When the driver challenged him, he was struck in the face.

The suspect appeared drunk, was carrying a bottle and may have come from a party nearby. After the assault he got off the bus and made off in a westerly direction along Western Road.

PC Matt Smith, investigating, said: “The victim, a driver for Brighton and Hove buses, was just doing his job when he was subjected to this unprovoked and violent attack.

“It has left him with a nasty injury and badly shaken, such that he has yet to return to work.”

Anyone who saw what happened or who can identify the suspect is asked to report details online or call 101, quoting serial 1356 of 17/1.
Alternatively, please visit the Crimestoppers website or contact the independent charity anonymously on 0800 555 111.