The faces of two suspected motorbike thieves can be seen in CCTV footage captured in Brighton as they rode through town on Friday (2 February). 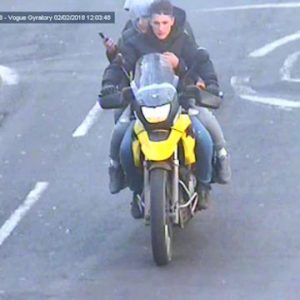 Sussex Police published a still picture from the footage today (Monday 5 February) as part of their efforts to trace them.

The force said: “Police want to identify the driver of this stolen motorcycle in Brighton.

“The BMW motorcycle was stolen from Preston Road, Brighton, on Friday at 11am.

“The yellow and black 650cc motorbike was then spotted with three suspects on board on CCTV around the Vogue Gyratory in Lewes Road, Brighton, an hour later.”

PC Andy Boucher said: “We are keen to talk to three youths pictured on the bike.

“This is a powerful motorbike and none of them were wearing helmets.

“They are not only putting themselves in danger but other road users too.

“If anyone recognises them or has any information please contact us.

“Anyone with information should contact police online or ring 101 quoting Operation Handlebars.”