A woman was raped in Brighton and, although a suspect has been arrested, detectives are keen to speak to three men about the case. 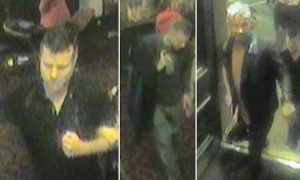 The force said: “A woman reported being raped after meeting a man in East Street on (Friday) 27 October last year.

“The 21-year-old victim was in in the company of three other men who she had been with in the Pavilion Tavern pub just before she met the suspect.”

Detective Sergeant Kerri Bartup said: “We are keen to trace these three men, all white and thought to be in their twenties, who may have information that could help our investigation.

“They are not suspects as a man has been arrested and charged with the offence.

“If anyone recognises any of the people in the images, please contact us.

*Javon Raffington-Paul, 20, of St Leonards Road, Eastbourne, has been charged with raping a woman on Friday 27 October and has been remanded in custody to await trial.

Snow and ice warning issued for Brighton and Hove