Albion are back to eleventh in the Premier League after outplaying in-form Swansea at the Amex.

Chris Hughton chose to stick with Glenn Murray up front in preference to Leo Ulloa or indeed Jurgen Locadia.

Swansea set up in a 4-4-2 formation and Albion soon caused them problems, with Jose Izquierdo almost given the freedom of the Amex to get in behind the defence early on.

With the diminutive Nathan Dyer in an advanced position Swansea appeared very light in central midfield and with 17 minutes gone a combination of Davy Propper and Izquierdo sent Murray away.

He was bundled over by Alfie Mawson. Referee Mike Dean awarded the Albion a penalty which Murray nonchalanty conveterd with a chip over Lukasz Fabianski to put Albion in front. 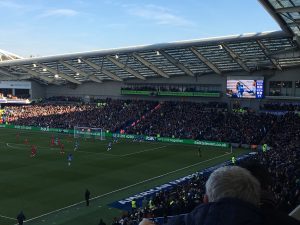 The Seagulls looked hungry for a second and Carlos Carvalhal was quite obviously not happy with his teams formation as the Swans went to three at the back and Dyer was replace by Jordan Ayew.

Propper dragged a shot wide as Ezequiel Schelotto showed his strength of speed and set up Anthony Knockaert and Murray again but Albion were rather wasting good chances.

It was clear that the Seagulls needed a second goal and Lewis Dunk came close after heading a Pascal Gross corner against the crossbar in the closing minutes of the half.

Ayew then forced Maty Ryan into a great save and the combination of Shane Duffy and Gaetan Bong attention saw the striker stab the rebound wide.

Albion got a real hold of the game early in the second half. Izquierdo and Propper were finding so much space. Izquierdo especially was getting clear down the right and put in numerous crosses that eluded Murray and Gross and usually Knockaert steaming in behind.

Although Swansea were offering little up front, Albion desperately needed a second goal.

It finally came with 20 minutes left after Izquierdo picked out Murray who stabbed the ball past Fabianski. Maty Ryan ran the length of the pitch to join the celebrations. 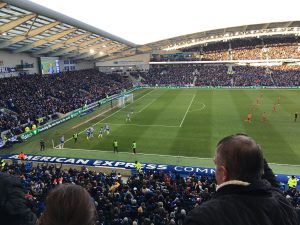 Swansea had just brought on Tammy Abraham when Albion’s second went in. Minutes later Gross flicked a ball for Knockaert to run on to and the little magician sidestepped Mawson and flicked it home with his left foot, effectively sealing the win for Albion.

Swansea’s best chance fell to Abraham, who rifled a strike home via the leg of the unfortunate Dunk. Dunk now has a record-equalling four Premier League own goals this season, drawing level with former Liverpool man Martin Skirtel’s dubious record from the 2013-14 season. Dunk still has 10 games to avoid holding the record outright.

For a short while Swansea looked like they thought they might get something but in the last minute more great work from the combination of Propper and Izquierdo saw the latter cross towards Dale Stephens.

His scuffed effort was bundled home by substitute Locadia to give the record signing his second goal in as many games.

Albion were worthy winners, recording their best top-flight victory since October 1981 against Manchester City at the Goldstone.

Next up for Albion, erratic Arsenal at the Amex, next Sunday (4 March). At the moment it would seem anything is possible!